Leslie Njamen Tita : “Social Networking is becoming such big trend nowadays, we can see new ones popping everyday, and very lately, a Cameroonian social networking site was launched by  Mambe Churchill and  Papa Qube, called Camerborn, in the effort to answer the needs of the local population which sites likeFacebook, Hi5 and Myspace haven’t, I wouldn’t dare say these sites haven’t radically changed the way we communicate today, but rather what I’m saying is these networks aren’t adapted to the local cultures, Lets see a practical example,Facebook today enables a Cameroonian teenager to chat with his friend from India, see the photos of his girlfriend who lives in Britain and read the status of his brother studying in the US and also its enables him to spend countless hours playing CafeWorld and FrontierVille, But what it doesn’t enable him to do, is to prepare for his upcoming  GCE or BAC examinations, it doesn’t enable him share his homework with his classmate who is in Nkoukolou and also, it doesn’t enable him to find other students like him who have difficulties in Maths and are looking for ways to fix that and people to share that with. Camerborn was created to enable that.  I was greatly privileged to be part of the project, and thus i took upon the task to  redesign the present UI (User Interface) to something more COOL, and I thought it will be easy to do, but little did i know, that designing for the Social Media could be very challenging.

That challenge definitely made it more interesting, and thus I discovered like many before me that UIs for social sites have nothing to do with the UIs for traditional websites, because in a social networking, you have to think like the user and not like a designer, you also have the obligation to design what will be pleasant and usable for the users and not what pleases you, you must be guided by the principles of usability, user experience and  user interaction, but the most challenging aspect, is that of designing a product that will be simple enough for the millions of Cameroonians with its 3.9% internet penetration and over 176 660 Facebook users but also be mature enough for the other visitors from around the world, so i was inspired in a first run by a concept an Australian designer Barton Smith developed “Facebook Facelift”, actually he took upon himself to redesign Facebook.

So after days and days of brainstorming and prototyping on paper and in my mind, I came up with what I would call the profile page design, I know you might ask yourself “Why did he first design the profile page before the home page” , I have no answer to that, so the designs goes as thus, at the top the logo and menu items. Below that the share section and profile picture and immediately below that, the different post and profile menu items

From the above design its was pretty easy to do the Home page, surprisingly after that ideas simply just flowed in, and I changed tons of things, finally came up with this as the landing page,

After consultations with team members, it was decided the background be changed back to Black, which I clearly didn’t like but as I earlier said, you aren’t designing for yourself and the founders also decided it would be better we change the Camerborn UI gradually and not to do a complete redesign, Good Decision or Not, only the future can tell. I also decided to play around with the interface for mobile web and also a co-worker  William Takor adapted the design for iPhone.

So while waiting for Camerborn to become bigger than the “The Social Network”, we shall still keep the present design and progressively aim towards something better.

I will be posting the PSD files i used in these designs shortly for your private and public use. 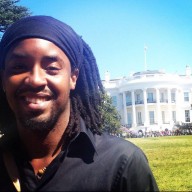